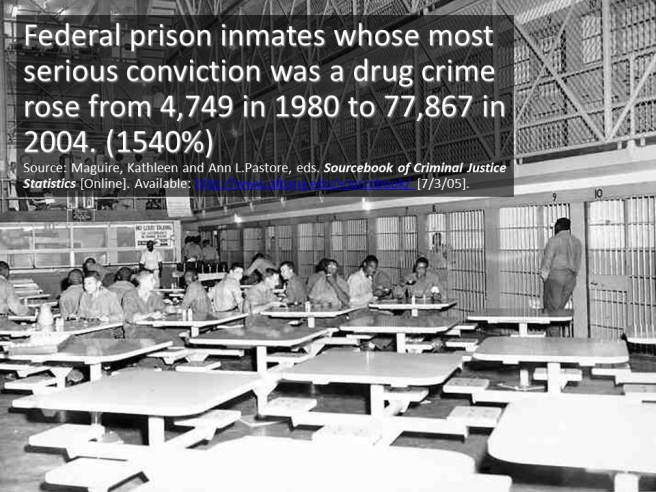 I’ve always thought that there’s a lot that could be done to improve the state of the drug war without passing a single law. Police and prosecutors have a lot of discretion in terms of what priorities to maintain and which charges to file once someone has been arrested.

It sounds like the feds are about to exercise some sensible discretion:

Attorney General Eric H. Holder Jr. is set to announce Monday that low-level, nonviolent drug offenders with no ties to gangs or large-scale drug organizations will no longer be charged with offenses that impose severe mandatory sentences.

Holder is calling for a change in Justice Department policies to reserve the most severe penalties for drug offenses for serious, high-level or violent drug traffickers. He has directed his 94 U.S. attorneys across the country to develop specific, locally tailored guidelines for determining when federal charges should be filed and when they should not.

The details are simultaneously exactly what you’d expect and shocking.

And some people wonder why we’re reluctant to embrace the latest and greatest pharmacological fad. Keep all of this in mind next time someone suggests that medicalizing addiction treatment will improve professionalism, ethics and reliance on scientific evidence.

Glaxo also used sham advisory boards and speakers at lavish resorts to promote depression drug Wellbutrin as an option for weight loss and a remedy for sexual dysfunction and substance addiction, according to the government. Customers were urged to use higher-than-approved dosages, the government said.

GSK paid millions to doctors to promote the drug off-label during meetings sometimes held at swanky resorts, the government said. The company relied on pharmaceutical sales reps, “sham advisory boards,” and continuing medical education programs that appeared independent but were not.

The company went to extreme lengths to promote the drugs, such as distributing a misleading medical journal article and providing doctors with meals and spa treatments that amounted to illegal kickbacks, prosecutors said.

“GSK’s sales force bribed physicians to prescribe GSK products using every imaginable form of high priced entertainment, from Hawaiian vacations to paying doctors millions of dollars to go on speaking tours to a European pheasant hunt to tickets to Madonna concerts, and this is just to name a few,” said Carmin M. Ortiz, U.S.attorney in Massachusetts.

Crimes and civil violations like those in the GlaxoSmithKline case have been widespread in the pharmaceutical industry and have produced a series of case with hefty fines. One reason some have said the industry regards the fines as simply a cost of doing business is because aggressively promoting drugs to doctors for uses not officially approved — including inducing other doctors to praise the drugs to colleagues at meetings — has quickly turned numerous drugs from mediocre sellers into blockbusters, with more than $1 billion in annual sales.

Stories have noted that Pfizer agreed to a $2.3 billion settlement in 2009. Also, Johnson & Johnson settled with Arkansas for $1.2 billion for several violations, including:

…for not disclosing the risks of the antipsychotic Risperdal.

GSK allegedly participated in the publishing of medical journal articles that stated paroxetine was effective in patients under 18, when, in fact, the data showed that the opposite was true. At the same time, the company withheld study data in from two other studies in which Paxil also failed to demonstrate efficacy in treating depression in patients under 18, according to a press release from the Justice Department.