The new laws will allow a state resident to obtain a prescription for naloxone, also known by its brand name, Narcan, to immediately reverse the effects of an opiate overdose, whether due to heroin or a prescription drug such as Vicodin or OxyContin. It also requires emergency medical technicians to carry it on the ambulance, something that is already common practice throughout southeast Michigan.

This is very good news.

The next big question is, what comes after the OD? 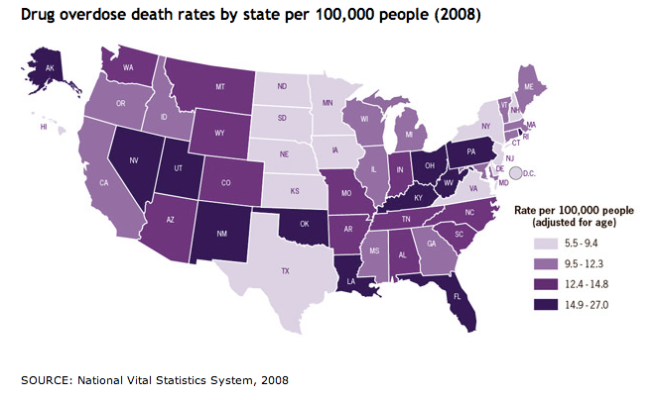 These images speak for themselves. Here are a couple of important sentences:

Between 1999 and 2009, drug poisoning deaths grew by 394 percent in rural areas and 279 percent for large metropolitan areas, according to the CDC’s county-level look at the data.

According to the CDC, roughly 60 percent of all OD deaths in 2010 were caused by prescription drugs, with three-fourths of those cases involving painkillers.

The work of advocates like these is growing more important.

We know how to crackdown — but we seem ignorant when it comes to what to do with all those addicted people we’ve “cracked down” on. You may thwart them with your database at the pharmacy, but they’re still addicted. Now what?

Abuse-deterrent formulations of drugs and prescription drug take-back days are well and good, but they don’t reverse an overdose, they don’t educate about drug safety and they don’t provide ready access to treatment. They don’t address the factors that cause people to turn to drugs for relief and they don’t acknowledge the uncomfortable fact that despite our best efforts, for some portion of the population, rehabs won’t work, methadone won’t work, and neither will cold turkey, tough love, prison, prayer or 12-Step.

Knowing that is true, we should take positive steps to address that reality with a health-oriented approach. We should bring the most marginalized populations back into the fold, increasing their interactions with physicians, counselors and other supportive service providers, without fear of arrest or incarceration, and without demanding abstinence.

We should consider the benefits of physician-supervised, prescription pharmaceutical heroin maintenance programs.

“despite our best efforts”?

Have we ever really given these people our best efforts?

When “helpers” this pessimistic, it’s no wonder nothing’s worked.

This feels a lot like under-treating tuberculosis until it becomes treatment resistant and then claiming that the realistic and “health-oriented approach” is to ship them off to Arizona. How about trying to treat them in a manner we know works? We’ve never tried that, have we? And, it’s not too expensive.