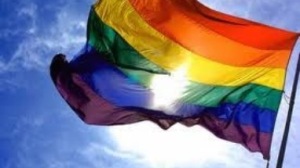 I know about Marty Mann, but my understanding is that she was in the closet and I knew nothing else about gay people in early AA. I was surprised and pleased to learn that the history of gay membership in AA goes back to at least 1937. It turns out that this story from the 3rd tradition was about a gay man seeking help:

On the A.A. calendar it was Year Two. In that time nothing could be seen but two struggling, nameless groups of alcoholics trying to hold their faces up to the light. A newcomer appeared at one of these groups, knocked on the door and asked to be let in. He talked frankly with that group’s oldest member. He soon proved that his was a desperate case, and that above all he wanted to get well. “But,” he asked, “will you let me join your group? Since I am the victim of another addiction even worse stigmatized than alcoholism, you may not want me among you. Or will you?” There was the dilemma. What should the group do? The oldest member summoned two others, and in confidence laid the explosive facts in their laps. Said he, “Well, what about it? If we turn this man away, he’ll soon die. If we allow him in, only god knows what trouble he’ll brew. What shall the answer be – yes or no?” At first the elders could look only at the objections. “We deal,” they said, “with alcoholics only. So went the discussion while the newcomers fate hung in the balance. Then one of the three spoke in a very different voice. “What we are really afraid of,” he said, “is our reputation. We are much more afraid of what people might say than the trouble this strange alcoholic might bring. As we’ve been talking, five short words have been running through my mind. Something keeps repeating to me, `What would the Master do?'” Not another word was said. What more indeed could be said?”

The approach in those early days seemed to be, “the only thing we care about is that you’re an alcoholic.” The unfortunate corollary to this was social pressure to not discuss one’s sexual identity (Unless, of course, you were heterosexual.) or stay in the closet. To be fair, this was still very progressive for the time and they took the same approach to many other “problems other than alcohol.”

Also on the topic is this talk by Barry L. (author of Living Sober) about the influence of early gay members of AA on the development of the 3rd tradition.

If you are a Dawn Farm staff and you’re interested in borrowing the book, let me know.

View all posts by Dawn Farm