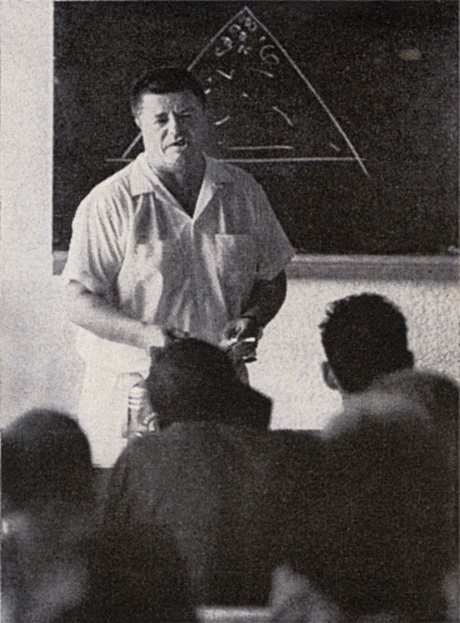 Cabinet Magazine has an article on the bizarre history of Synanon from beginning to end:

Soon the number of people wanting to join Dederich’s after-hours sessions grew too big for his living quarters. This was largely due to an influx of drug addicts who had heard of Dederich’s ability to keep people straight. For the addicts, Dederich offered their only chance of salvation. AA didn’t want them and the state offered only hospitalization or prison. Sympathetic to their need, Dederich scraped together some cash and rented an old store on whose front he painted the letters TLC, short for “Tender Loving Care.”

The store was a safe place in which drugs, alcohol, and violence were forbidden. But the reason for going there was Dederich himself. Following the LSD experiment, he had become an awesome presence. He held seminars now in which he would talk for hours on end, weaving psychological and philosophical insights together and ridiculing, cajoling, teasing, and harrying the addicts who surrounded him. And most amazingly, it seemed to be working. When one addict slurred the wordsseminar and symposium together, Dederich suddenly had a name for his project—Synanon. It was a word redolent of “sin,” “Zion,” and, of course, “Alcoholics Anonymous.”

“I knew something,” remembered Dederich, “and I wanted to transmit this to other people. I had the feeling I could really make people more comfortable.” He would choose to do this by making them profoundly uncomfortable. Combining AA’s teachings with the cursory knowledge he had of psychiatry and a heavy dose of Ralph Waldo Emerson’s 1841 essay “Self-Reliance,” Dederich took his natural loquacity and love of rhetorical combat and created a sort of moonshine therapy, a form of treatment that would live on long after Synanon was destroyed and Dederich was disgraced. It was known as the Game.

Check out the rest here.