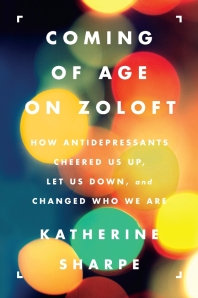 An interesting take on anti-depressants from a writer who has benefited from them:

The mainstreaming of medication has bred confusion about what’s normal. In some sectors, we’ve grown so vigilant about the possibility of having a mental disorder that this vigilance becomes counterproductive, a source of anxiety in itself. Every negative emotion becomes a potential sign or symptom. I think people, particularly adults, should use medication if they wish, but I am concerned about the changing goalposts of what’s considered pathological. It’s nice to know that medication is available, but it’s also important not to lose sight of the comfort that can come from talking openly with each other, realizing that not every instance of feeling sad, or overwhelmed, or disappointed, or anxious, is a sign of something medically wrong.

With youth, I feel that a conservative approach to medication is best.

Partly that’s because of the way that getting a mental-health diagnosis can intersect with the adolescent search for self. Being diagnosed and using medication confers an identity, that of someone with a mental disorder. To an adolescent who is preoccupied with constructing an identity anyway, and looking for clues to who she is, that can be a big deal. Some adolescents feel that having a diagnostic label is clarifying and that it helps them. But others wrestle with it. They ruminate about what it means to be sick. They take that identity deep inside, and sometimes magnify it way out of proportion. A diagnosis event can have lasting, rippling consequences, and I think adults should be very cautious and careful before they impose a diagnostic label, or let a young person self-impose such a label, on what may be ordinary developmental struggles.

More thoughts on the use of antidepressants with kids. Here, she’s commenting on a piece in The Atlantic that discussed her book.

I think one thing that piece illustrated nicely is the potential difference between starting antidepressants as an adult and starting them young.

Kelly was saying, ‘Look, antidepressants help people; they helped me; they’re this wonderful thing, and I don’t understand why you people are trying to shoot holes in them.’ Kelly has a story that was similar to that of a lot of adults who start antidepressants: she was in therapy for years; therapy was helpful but notthat helpful; she went into crisis and finally overcame whatever inner resistance she had about trying antidepressants, and they were great — she wished she’d tried them sooner.

I very much respect that story, and many others have one like it. Part of what I’m on about in the book is that for people who start medication as teens, or even younger, the story is different. For them, using medication is often not their choice or not their idea. They don’t have the experience of trying other remedies for years and then reaching a point where they say, ‘You know what, these things aren’t working, this problem isn’t going away, and I’m going to take it seriously now and try something new.’ They haven’t necessarily had a chance to sort out what’s the turmoil of growing up and what might be deeper or longer lasting. Sometimes it’s very obvious that an adolescent is dealing with a real mental problem that goes way outside the realm of teen angst. But in other cases it isn’t always so clear. So for some of the people who start young, the narrative ends up not being one like Maura Kelly’s, of, ‘I had a problem, and then I used my own agency to find a solution, and it was wonderful.’ It’s more like, ‘Someone thought I had a problem, and this thing was given to me, and maybe it helped me or maybe it didn’t, sometimes it’s hard to tell, and if I stayed on it for years then I’ll never be quite sure, either what was the matter in the first place, or how I would have developed if I hadn’t taken this drug.’ It’s a singular experience, but it’s becoming more and more a hallmark of our time. That’s what I was trying to capture in the book.

One trend I find interesting is this. There was a time when anecdotes were used to attack antidepressants. The reaction of researchers and other advocates was that evidence should guide practice. Now, as the evidence has softened, we see many of these advocates using anecdotes to make their case. I’m not one to dismiss experiential knowledge, so this is just an observation.

3 thoughts on “Coming of Age on Zoloft”